A pair of speckled socks! These were a pleasure to knit. The speckles made each row a fun, little surprise, and of course, the cashmere content in the yarn made the knitting itself so nice. I knit them with a yarn I had been saving for a rainy day, so to speak, and it feels good to use the yarn for a cozy pair of socks. I knit one of my very favorite patterns, the Cyril socks, but omitted the twists, resulting in a well-fitting wide ribbed sock. I've done this pattern with this modification several times now, both for myself and for Nicholas and have been pleased with the results each time.

An Oscar cardigan for Cooper. This project took up a lot of mental space for me, ever since I acquired the yarn last summer. I love knitting little things for Cooper, and it's especially enjoyable since he is such an enthusiastic recipient. That said, babies and toddlers grow rapidly and so there is pressure to knit quickly and for me, anyway, the deliberation of size. Ultimately, I bought sufficient yarn for this cardigan in the 2/3 year size, but then procrastinated in the knitting of it. So when I cast on, I chose the 3/4 year size without accounting for the fact that I wouldn't have enough yarn. As I knit this in a flurry of my nesting urge to finish things and came to the collar, I realized I did not have enough of this (now discontinued) yarn. I reached out to other knitters on Ravelry who listed this yarn as in their stash at some point, and amazingly enough, a knitter generously sent me almost two full skeins so I could finish the sweater! Thank you, Tanja! (Not that she reads the blog).

The cardigan is definitely oversized, but I would rather that than have Cooper outgrow it quickly. It still needs buttons, and in the included photo, it isn't blocked, but the knitting and seaming are done.

I have long talked about sewing a Chubby tote (free pattern tutorial available on YouTube, and paid pattern also available with more sizes). At Hobby Lobby, I saw some fabric I loved, bought it, and then decided on a whim one day to sew it up. And my goodness, I underestimated how much I love this tote. The size is perfect for holding a larger knitting project, such as a sweater, and it also works beautifully to store a few smaller knitting projects. I've been carrying it around the house and out to the front porch and back deck on mild days so I can bring my knitting for a few stitches here and there between pushes on the swing and picnic snacks, and saying ready, set, go! for toddler races across the deck. In lieu of leather straps, which I didn't have, I followed her tutorial to make fabric straps out of some neutral linen. The exterior fabric is a quilting cotton, reinforced with interfacing, and the lining is a Robert Kaufman cotton/linen blend that I enjoy so much I could make a million projects with it. This will not be the last Chubby Tote that I make.

I have some white and blue windowpane fabric (also a cotton and linen blend) that I really love, and it's possible that a sewing mood will strike again before baby's arrival, in which case, I will likely use that fabric for something.

Creatively-speaking, I feel very inspired lately. It's just a matter of not beginning too many projects that will ultimately overwhelm me. My main goals are to finish my dad's socks, and to perhaps cast on a pair of vanilla or simple textured socks to have as a small project. That would leave me with three straightforward knitting projects when baby boy arrives, all of which require varying headspace, and none of which are urgent.

Until the next creative update, happy making!

P.S. — My other work-in-progress still growing and kicking and hiccupping and inspiring devotion in his big brother. 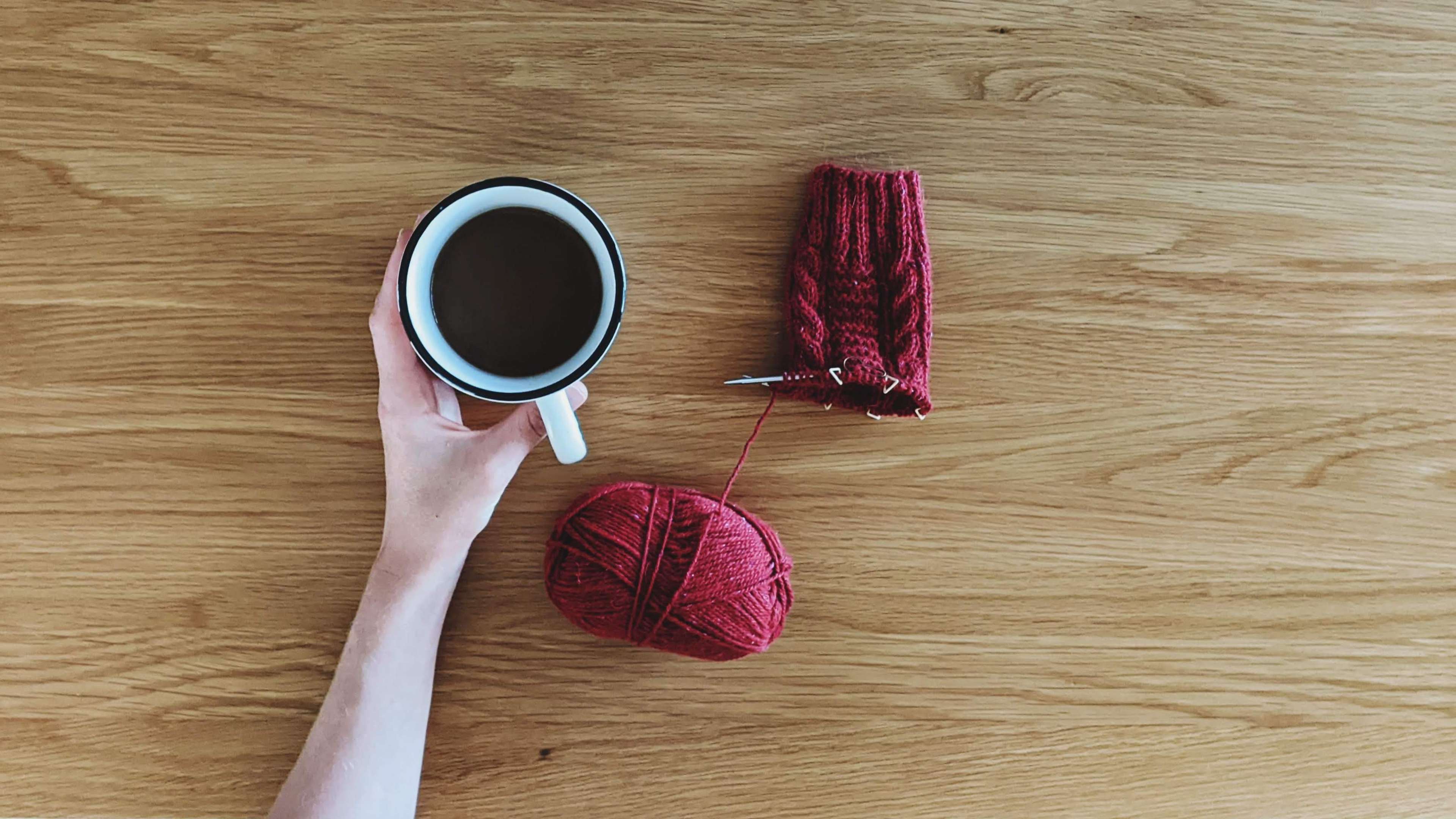 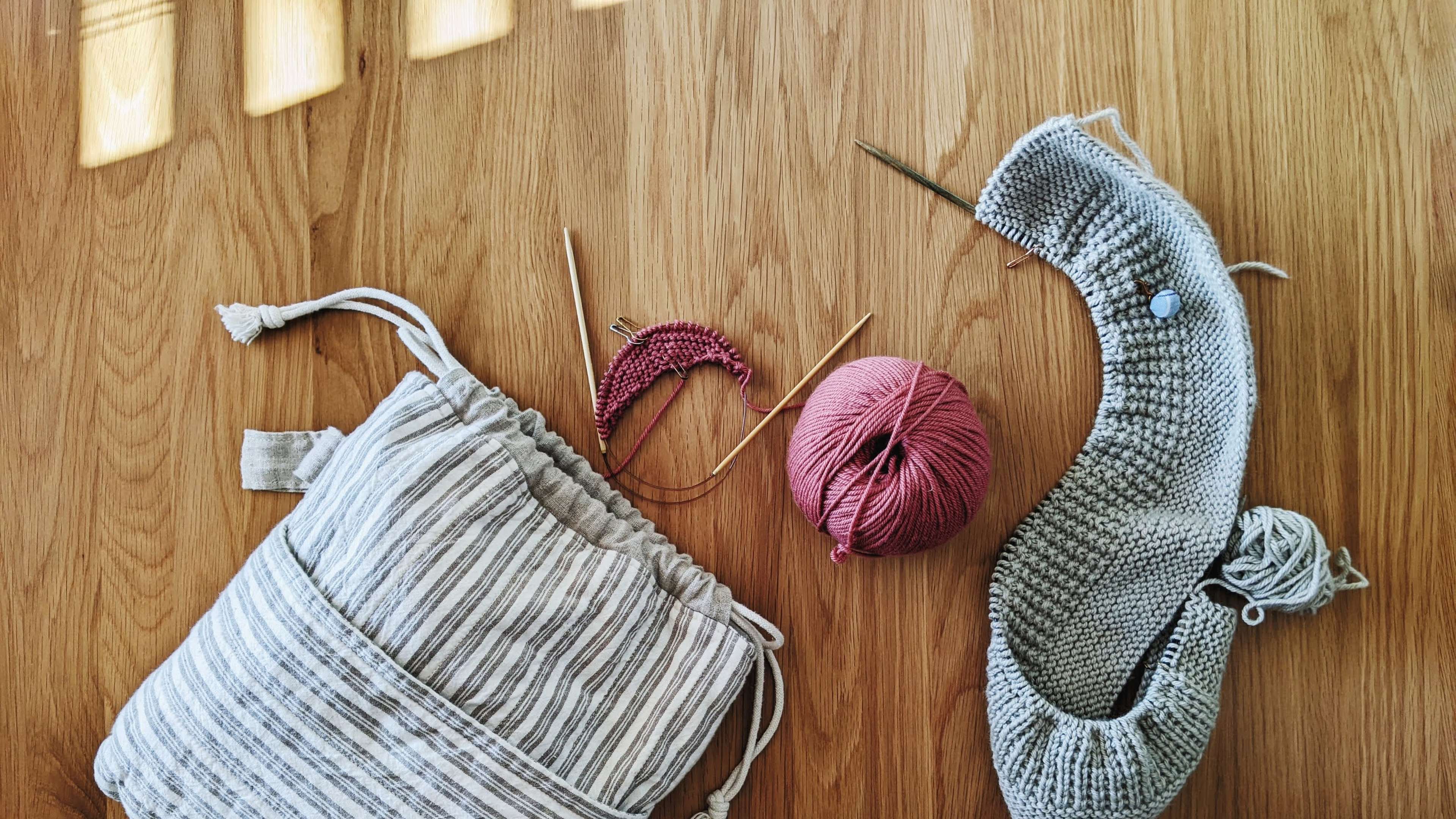 Each year, I like to loosely outline creative goals or desires for the coming year, including bookmarking specific patterns or mentioning materials (yarn or fabric) that I'd like to use. I always keep in mind that my creative plans or whims will likely migrate somewhat, but taking a moment to think through projects at the start of a year (sort of) makes me excited feel refreshed in my making. Also, I find that I'm less impulsive in my purchases when I have a plan to actually use materials from my stash.